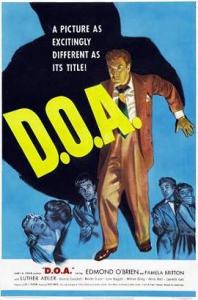 Rudolph Maté, director of my next subject D.O.A., had humble beginnings in the film world as a cinematographer.  He is responsible for shooting some of the best films of the 1930’s and 1940’s, and his resume includes: two silent films with the legendary Carl Theodor Dreyer (Vampyr and The Passion of Joan of Arc), William Wyler’s Dodsworth, Alfred Hitchcock’s Foreign Correspondent, Leo McCarey’s Love Affair, Ernst Lubitsch’s To Be or Not to Be, Charles Vidor’s Gilda, and finally Orson Welles’ The Lady from Shanghai.  Maté’s resume is undoubtedly impressive to say the least, and this experience behind the camera definitely helped shape what would become a prolific career as a director.  As a director, Rudolph Maté helmed a great deal of film noirs like Forbidden, The Dark Past, Union Station, and The Green Glove, most starring up-and-coming stars like William Holden, Tony Curtis, and Glenn Ford.  On top of his noir catalog, Maté directed a great deal of westerns, adventure and action, and science fiction films of the era.  He was something of a director for hire, but it very clearly paid off for him with many of his films receiving technical Academy Award nominations.  D.O.A. is perhaps the film Maté is best remembered for, and it is seen as one of the better film noirs of the 1950’s by many critics.  The film stars Academy Award winning Edmond O’Brien (also featured in 1946’s The Killers) as Frank Bigelow, and prolific television stars Pamela Britton as Paula Gibson. 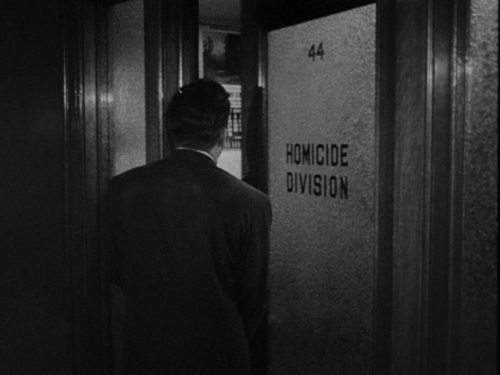 Frank Bigelow (Edmond O’Brien) walking into the police station in the riveting opening of 1950’s D.O.A.

D.O.A. follows a dead man named Frank Bigelow (Edmond O’Brien) – only he’s not actually dead just yet.  Frank has been fatally poisoned by an unknown party for reasons he’s not quite sure of.  The film starts shockingly with Bigelow walking into a police station to report his own murder, yet he’s surprised to find that the police are expecting him. From there, we’re treated to a long series of flashbacks showing Frank’s life as an accountant.  After departing for a vacation and not bringing along his girlfriend Paula Gibson (Pamela Britton), Frank finds himself in a daze after a visit to a wild nightclub.  It is at this nightclub that Frank Bigelow unknowingly seals his own fate and drinks the poison that will slowly lead to his demise.  Doctors conclude that there is no way to combat the poison in Frank’s system, and give him a number of days to live.  Using the last of his time on earth, our protagonist tracks down suspects who may have been involved in his eventual murder.  He pays visits to a wild array of characters and receives varying levels of hospitality in return.  Eventually we come to find that not only has Bigelow has become embroiled in a transaction of stolen iridium (for which he served as the notary public), but he has also unveiled something much more personal about his murderer.  Will Frank Bigelow bring his murderer to justice, or will his time run up before cracking the case?  Find out by watching D.O.A.

Unfortunately there had to come a time during the marathon where a film just didn’t resonate with me at all.  As much as I hate to have to write these words, that film is Rudolph Maté’s D.O.A.  It isn’t a complete failure by any means, but the film seems so unsure of itself at times.  The script is a mess, and it took me two watches to completely follow along and understand the roles that our wide assortment of side characters played.  D.O.A. starts with a terrific and compelling opening scene, but very quickly follows into the incredibly long, painfully unfunny, and tedious vacation part of the film.  The exposition here is quite heavy, and yet it’s still never completely clear to me what was going on.  There’s just so much going on throughout the film, and none of it ever really has the time to grow into something truly memorable or significant.  Luckily, Edmond O’Brien’s central performance is very good, and gives the audience somebody to root for.  His character may not be well-developed or entirely three-dimensional, but it’s still a great deal of fun to watch his encounters with the potential suspects.  Speaking of the suspects, it was never entirely clear to me why some of these people were being approached by Bigelow.  I understood the motivations at times, but I was left scratching my head more often than not.  Luckily for me, when things finally ramped up in the story, I was instantly hooked regardless of what I thought about the actual story unfolding.  Another good aspect of the film is that Rudolph Maté’s cinematography background absolutely pays off in spades here.  The composition of shots and direction is smooth, subtle and clearly very well-trained, and Maté and his team brings out some of those beautiful noir motifs that I love so much. 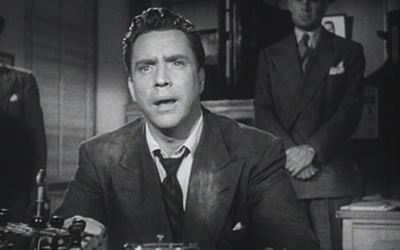 Overall, D.O.A. is something of a mixed bag.  Even now, a few days removed from the film, I’m not entirely sure what to think about it.  It has many admirable elements and even some very exciting chase sequences, but nothing that I’ll be able to remember in vivid detail a week from now.  Rudolph Maté is a director whose body of work I’d like to explore in more detail, but D.O.A. has made me slightly wary of doing so.  It’s not a bad film, but it certainly isn’t a great one either.  I suppose you can’t win them all.  I would recommend you view D.O.A. at your own discretion.