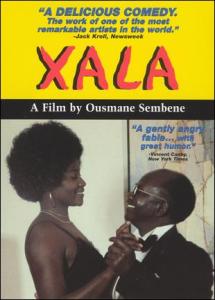 There’s a reason why Senegal-born director Ousmane Sembene is often considered to be the father of all African cinema.  With a career spanning five decades, the great Senegalese director paved the way for entire generations of African filmmakers all over the continent.  His influence on the African film scene can be likened to that of John Ford and D.W. Griffith in America, Satyajit Ray in India, and F.W. Murnau and Fritz Lang in Germany.  With his breakout hit Black Girl (or La Noire de…) in 1966, Sembene captured the attention of an international audience, something that no African film before it had ever done.  Xala was his fifth major motion picture, coming hot off the heels of hits like Black Girl, Mandabi, and Emitai, his film was a stinging satire about the political and economic climate of his home country.  Filmed in French and Wolof, Xala was unlike any work Sembene had produced to that point.  It had a dry wit to it, and its themes were undeniably biting and had a profound affect on audiences.  The film was entered into an early incarnation of the Moscow International Film Festival, but sadly lost out to films by more established and widely recognized directors (Akira Kurosawa’s incredible Dersu Uzala, Andrzej Wajda’s Oscar-nominated The Promised Land, and Ettore Scola’s We All Loved Each Other So Much).  It would go on to receive a great deal of acclaim in America, receiving positive reviews from the great Roger Ebert and the prestigious New York Times.  After the success of his 1975 hit, Sembene would go on to direct five more films throughout the 1970’s, 80’s, 90’s, and the 2000’s. In 2004, his film Moolaade would become arguably his biggest success with a win at the Cannes film festival and critical acclaim across the world.  This film would prove to be his final film as Ousmane Sembene would pass away in 2007 at the age of 84.  Despite widespread acclaim, Xala and the other films of Ousmane Sembene have been all but forgotten by critics and audiences throughout North America, with the majority of his films being frustratingly difficult to obtain and even then only available in less than stellar quality. 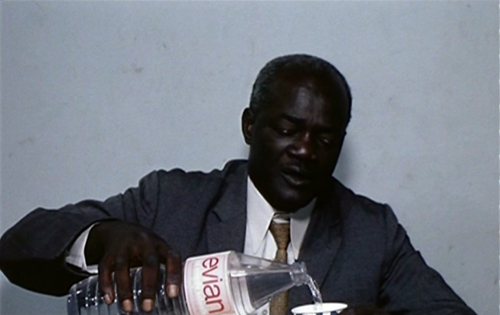 Xala takes place in modern day Senegal, and mostly follows a group of wealthy businessmen involved in the chamber of commerce.  Our lead character, “El Hadji” Aboucader Beye (Thierno Leye), is an aging businessman looking to show off his success in an extravagant way.  What better way to impress people than to take his third wife?  By marrying a young woman, Beye looks to show off his vast economic and social successes.  Unfortunately for Aboucader Beye, things aren’t so simple.  While attempting to consummate his new marriage, the aging businessman finds that something isn’t quite right, and that things aren’t working in the ways that they usually do.  Beye comes to find that he has been cursed with xala, which is a crippling case of temporary erectile dysfunction.  He proclaims that his manhood has been taken away from him, and suspects one of his jealous and spiteful older wives of putting the inconvenient curse on him.  El Hadji, as he is known to his colleagues, secretly seeks assistance from the powerful men he surrounds himself with.  He and his colleagues go to great lengths to end the man’s xala once and for all, but their attempts are mostly met with no results.  Frustrated and desperate, he consults a marabout in the city to heal him of his affliction so he can get back to his daily business duties, but soon finds everything about his comfortable life unexpectedly crumbling beneath him.  Beye’s life is changed forever after he exposed for his corruption within the chamber of commerce, and worst of all is still cursed with the dreaded xala.  Will El Hadji be able to turn things around in his once cushy life, or will the negative forces working against him prove too powerful?  Find out in Ousmane Sembene’s classic satirical drama Xala!

I was a little nervous going into Ousmane Sembene’s much heralded Xala, especially since my only previous experience with the director was his excellent final film, Moolaade.  Xala is a much more subtle and politically-motivated film than his final effort was, and I was sure that I was going to struggle to find any enjoyment in the film’s nuanced nature.  I’m happy to report that this absolutely wasn’t the case, and I was able to enjoy much of Xala even without much of an idea of Senegal’s (and Africa as a whole) political and economic climate of the time.  While there’s no doubting the very obvious subtext being told throughout the film, the story itself does stand on its own well enough to be enjoyed by any viewer who is up to the challenge.  The entire idea of a wealthy businessman who seemingly has everything deciding to take a third wife in the form of a beautiful young woman is humorous, and becomes absolutely hilarious when the erectile dysfunction problem comes into play.  Everything he knows is flipped on its head and for the first time in his rather privileged life, Aboucader Beye has been stripped of what makes him feel most powerful, and instead shamed into near submission.  His first and second wives and his daughter being completely opposed to the idea of the third wife adds to Beye’s problems, and ensures that no matter what he tries he isn’t able to get ahead in any sense.  Xala’s main character isn’t likeable even for a second, and it really helps nail home the central ideas of the film, which is the complete and utter incompetence and ineffectiveness of many African governments of the time.  El Hadji benefits greatly from being a corrupt business, taking from those around him and trying to show it off to others in the form of a younger woman, far out of his league.  The satire used throughout is absolutely biting, and does an excellent job at letting the audience know exactly how Ousmane Sembene feels about the people running his country and continent.  The ending of the film is where the film absolutely shines, at once being both hilarious and scathing.  Though it may be a little tough to watch for some, it’s always satisfying to see the wrongdoers getting what they truly deserve, and that is especially true for Sembene’s masterpiece. 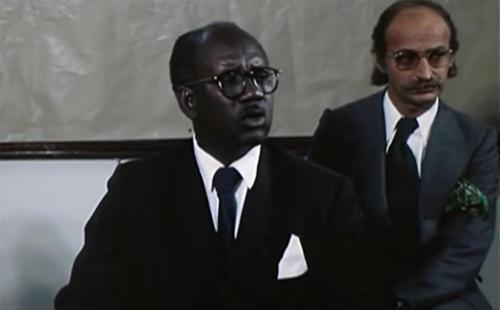 It’s too bad that his films are so tough to track down in our day and age, especially with the advent of the internet.  I sincerely hope that a distributor like the Criterion Collection or Twilight Time will get ahold of his filmography and do it justice in the form of an incredible home video release.  Films like Xala are ripe for rediscovery, and deserve to truly be appreciated in their utmost glory.  Xala is funny and sincere in its over-the-top satirical nature, and even without knowledge of the country’s political climate you can feel the frustration in every moment on screen.  Xala is a film that deserves all the acclaim it’s received over the years, and I hope that my review causes even just one person to discover the films of Ousmane Sembene and others from Africa.  Xala is highly recommended to anybody who can appreciate international films, or enjoys biting and intellectual satire.