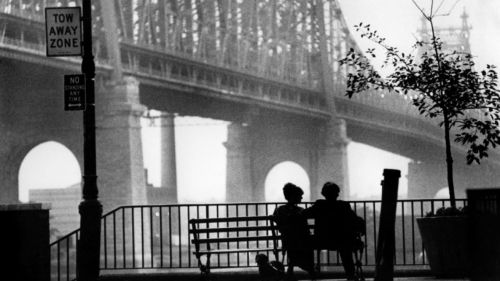 Woody Allen’s best years came between the late 1970’s and throughout the majority of the 1980’s, with the occasional classic being released afterward. Allen’s 1979 film Manhattan uses the winning romantic comedy formula that saw Annie Hall win Best Picture in 1977, creating a funny, charming, and highly intelligent film in the process.  While Manhattan never quite reaches the highs of the aforementioned Annie Hall, it easily places second among Woody’s prolific career.  Starring Woody Allen himself as Isaac, a TV writer obsessed with New York City who is dating a 17-year old girl named Tracy (Mariel Hemingway). Things become complicated when Isaac begins seeing Mary (Diane Keaton), the mistress of his best friend Yale (Michael Murphy).  The love triangle dynamic is a classic trope in the romantic comedy, and one that Allen has used throughout his filmography.  The difference here is that Manhattan feels much more genuine and heartfelt than many other Hollywood rom-coms, doing its best to avoid falling into cheap cliches.  The way Woody Allen portrays forbidden romance in a place like New York City comes straight from the heart, with the writer-director turning the bustling city streets into a romantic figure of its own.  Allen uses black and white photography to its full effect here, supported by the legendary cinematographer Gordon Willis.  The pair would create one of the most famous and enduring images of Woody Allen’s entire career (pictured above).  Mariel Hemingway’s Academy Awards-nominated performance is the standout of Manhattan, driving the film’s main theme of bittersweet romance almost singlehandedly in moments.  Familiar comedic turns from Woody Allen and Diane Keaton certainly don’t hurt the film, using their famous chemistry to play off one another in performances that rival those found in Annie Hall.  Manhattan is one of Woody Allen’s most beautiful films, which in a career spanning fifty years is saying a great deal.