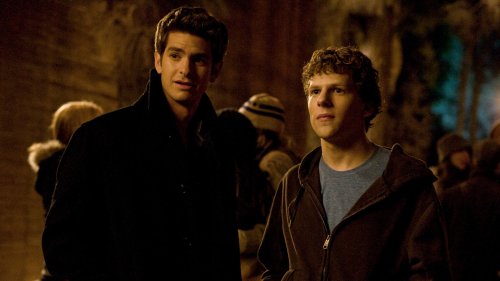 On paper, David Fincher’s The Social Network should never been nearly as effective or compelling – it’s a movie about the founding of Facebook and the events that followed.  Even though it was a great modern director tackling the material with a talented young cast, I can’t say I ever expected to be floored in the way that I was back in 2010.  The Social Network chronicles the young life of Mark Zuckerberg (Jesse Eisenberg), as he creates what will eventually go on to be the most popular social network of all time – Facebook.  He partners with trusted friend Eduardo Saverin (Andrew Garfield), eccentric millionaire Sean Parker (Justin Timberlake), and the driven Winklevoss twins (Armie Hammer). Eventually the success of the platform goes to the head of young Zuckerberg, whose business and personal relationships begin to crumble all around him.  The Social Network pushed director David Fincher from being a very good director, to being one of the modern greats.  The director shot many takes for some of the film’s more dialogue-heavy scenes, pushing his young cast to the limits, but also getting some truly great performances out of them all. Fincher also begins to dabble in post-production additions, like digital snow and breath, and even duplicating a character (Cameron and Tyler Winklevoss).  Not only does David Fincher show his prowess as a technical camera, but here he also proved that he is a true visionary with the use of these methods.  Just as, if not more, important to The Social Network’s success is the screenplay by the great writer Aaron Sorkin – perhaps best known for his writing on TV’s The West Wing.  Sorkin’s writing has always been criticized for being too smarmy or “scripted”, but it really works with a character like Mark Zuckerberg.  Sorkin’s dialogue is lightning fast at times, pushing the film’s dramatic weight with only words and actions – he creates this believable universe where each and every character is fully-developed and has their own unique motivations and goals in the project.  Every character speaks and acts differently, but when they all interact with one another it feels fluid and effortless in the best way possible.  Maybe I’m blinded by my love for Sorkin’s screwball comedy-like dialogue and situational writing, but he did win an Academy Award for the screenplay – obviously somebody out there agrees with my sentiments.  On top of Fincher and Sorkin’s all important behind the scenes efforts, in front of the camera are some of the best performances of 2010.  Jesse Eisenberg’s Mark Zuckerberg comes off as a likable neurotic and awkward loner in the first half of the film, and quickly becomes one of the more unlikable characters in film history for his actions (or lack thereof). Andrew Garfield’s Eduardo Saverin is all-too naive and trusting in his friend, which leads to his eventual downfall and his being so easily dumped – when he finally grows a backbone, it’s a truly thrilling moment.  Also noteworthy are Justin Timberlake’s eccentric million Sean Parker, who is instantly cool, but deeply vain, Armie Hammer’s Winklevoss twins, who are so overloaded with testosterone it’s a wonder they never just beat Zuckerberg up, and Rooney Mara’s Erica Albright, who is intelligent, strong, and far too good for Mark Zuckerberg’s mind games. The Social Network is a modern masterpiece in my mind, and rivals a film like Citizen Kane as a poignant and intelligent look at the meteoric rise and eventually fall of a young prodigy.  If you never saw it and only think of it as “the Facebook movie”, do yourself a favor and see this – it’ll prove your perceptions wrong time and time again.