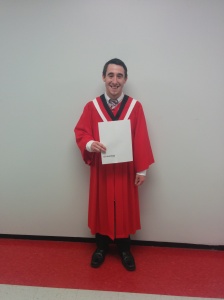 My name is Matthew McDonald, and I have been an admirer of the art of film since the age of 17 (and even before that, I knew there was something really special about the medium).  After a failed – but very rewarding – stint in film school at Niagara College in Welland, I took time to reassess my life and eventually decided to don the white collar and tie and enter into a much safer and steadier working environment. I am a Business – Management graduate at Canadore College, and am currently re-attending for Advertising and Marketing Communications.  This blog has been created with the intention of being something of a creative outlet for me, and also to sharpen my writing skills.

I’ve been influenced by a wide range of filmmakers since my introduction into the world of film. Some of my favourite directors are Billy Wilder, Woody Allen, the Master of Suspense Alfred Hitchcock, Paul Thomas Anderson, Quentin Tarantino, and Alexander Payne, to name a handful. My all-time favourite film is PTA’s Punch-Drunk Love, which I’ve seen countless times. It’s a film I fall in love with more every single time I see it, and one I can see very few flaws in.

I’m a man of eclectic taste, so I don’t really have a favourite genre or film, or any favourite actors. I’ll watch anything from Oscar-winning drama to cheesy 80′s slasher films, to Swedish art house films of the 1950′s. I will admit that I have a soft spot for horror and all things crime procedural’s. If you have a movie to recommend, I certainly won’t be turned off by any topic, actor, director, or time period. Art is art, no matter how old or controversial.

I hope you enjoy reading about my small obsession, and join me in my exploration of everything film. I’m open to any and all feedback, big or small!

Highest Recommendation: A truly great or memorable film, somewhere around a 9-10/10

High Recommendation: I loved it, but it’s not quite a masterpiece.  8/10.

Not Recommended: A bad film riddled with flaws. 4/10.