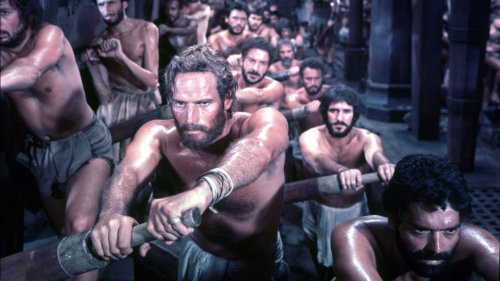 William Wyler’s biblical epic Ben-Hur is the movie that served as my introduction to classic films, creating a lifelong obsession with the silver screen in the process. I saw it as part of my grade 7 religion class all the way back in 2003-2004, and was captivated by every minute of the 3 ½ hour film.  Ben-Hur tells the classic story of Judah Ben-Hur (Charlton Heston), a wealthy prince living in Jerusalem with his mother (Martha Scott) and sister (Cathy O’Donnell).  His best friend is a man named Messala (Stephen Boyd), who after some time away from Jerusalem, returns to the city as a commander of the Roman garrison.  After an accident nearly costs the life of the governor of Judea, Ben-Hur is sent to the galleys by his once best friend, and his family imprisoned.  What follows is an adventure the scale of which had rarely been seen on screen before 1959.  The film spans several years, and sees the rise and subsequent fall of Jesus Christ, who plays a prominent figure in the film.  Wyler’s Ben-Hur is mostly remembered by the public for its incredible chariot race scene, which is still just as thrilling and visceral today as it was more than fifty years ago.  The film’s few action scenes feature a sense of realism and brutality that is not often seen in film’s of this era, and adds to Ben-Hur’s unique nature.  It’s never exploitative in this way, but instead uses its visceral nature to further the story along, and convey the weight of the situations faced by Judah Ben-Hur and those around him.  Charlton Heston’s performance as the titular character is tremendous, bringing an undeniable charm and charisma to the role that has proven to be unmatched in subsequent retellings of the story.  While Ben-Hur is more than 3 ½ hours long, it never feels slow or bogged down by its run-time, mainly due to its incredible writing and pacing.  Every scene feels meticulously crafted and has a sense of purpose, and major milestone moments are evenly spaced out throughout the film.  An example of the film’s excellent sense of pacing comes in its final act – even after the chariot race is done, the film manages to keep its hold on viewers with a rigorous journey to the leper colony, where we finally get some much needed emotional payoff.  Ben-Hur would go on to win 11 Academy Awards in 1960, including Best Picture, Best Director (William Wyler), Best Actor (Charlton Heston), Best Supporting Actor (Hugh Griffith), and Best Cinematography – only losing in one category.  Every minute of Ben-Hur is captivating and finely crafted – there’s no wonder why it was so well-received by a 12-year old me. 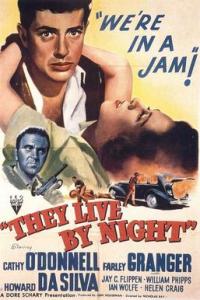 They Live by Night (1948)
Directed by: Nicholas Ray
Written by: Charles Schnee, Nicholas Ray (based on Thieves Like Us by Edward Anderson)
Starring: Cathy O’Donnell, Farley Granger, Howard Da Silva

The story of two young lovers on the run from the law is a wildly popular tale in Hollywood history, and many of its origins can very likely be traced back to 1948’s They Live by Night.  Nicholas Ray’s film noir is seen as many to be the prototype to the story of Bonnie and Clyde, a film many consider to be the most successful of the subgenre.  Though the similar stories had been told in the past (specifically in Fritz Lang’s 1937 You Only Live Once, and Hitchcock’s The 39 Steps), Ray’s film modernizes the story for a new generation.  Films that would follow the same story arc as They Live by Night include: 1950’s Gun Crazy, Jean-Luc Godard’s Pierrot le Fou, 1967’s Bonnie and Clyde, Terrence Malick’s Badlands, Gus Van Sant’s Drugstore Cowboy, and most recently Wes Anderson’s Moonrise Kingdom.  They Live by Night would be director Nicholas Ray’s debut behind the camera, and what a career it would lead to.  Ray would go on to direct such films as Johnny Guitar, In a Lonely Place, Rebel Without a Cause, Bigger Than Life, and Party Girl, and is still celebrated and analyzed decades after he passed away.  Ray has become something of a cult figure to cinephiles, and his legacy only continues to grow.  The film stars young Farley Granger, who would go on to be noticed by names like Alfred Hitchcock and Humphrey Bogart, and the lovely Cathy O’Donnell – a film noir regular for most of her ultimately short career. 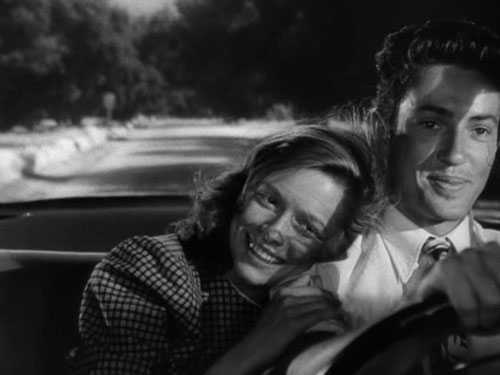 Farley Granger (Bowie) and Cathy O’Donnell (Keechie) on the run in 1948’s They Live by Night.

They Live by Night sees three bank robbers (Bowie, Chicamaw, and T-Dub) escaping from prison early on.  Our main character Bowie (Farley Granger) has been wrongly accused of murder and is now on the lam.  He decides to hire a lawyer in order to prove that he isn’t guilty of his alleged crime, but first must get his hands on the money needed. After becoming injured, Bowie seeks refuge with a gas station owner and his young daughter Catherine, or Keechie (played by Cathy O’Donnell).  After quickly falling head over heels for each other, the young couple decides to get hitched and run away together.  Bowie plans to become an honest, hardworking man, but unfortunately for the young couple life isn’t always that simple.  Bowie once again bumps into former partners in crime Chicamaw and T-Dub, and is coerced into joining the crew for one more dirty job.  Will the young couple live happily ever after, or will the life of crime catch up with them?  Find out by watching Nicholas Ray’s They Live by Night.

While the film isn’t exactly unique by today’s standards, there’s absolutely no denying the influence it has had on modern film.  They Live by Night avoids many of the film noir cliches we’ve come to know and love (and sometimes hate), and instead becomes something much more profound.  This is a love story through and through, with very little mystery involved.  The audience isn’t left to pick up the pieces or be the detective, but instead get to follow two well-rounded, and young characters who are very easy to like.  The film takes a little while to ramp up, but it’s smooth sailing once it gets going.  My favorite scene of the involves involves Bowie and Keechie getting married late at night in an odd little establishment.  The man officiating the marriage and the two witnesses are delightfully weird and eccentric, and the scene itself is quite funny.  This scene helps to relieve the tension felt through the first act of the film, and briefly makes it feel as if things are going to be perfectly okay for the young couple.  The performances by Farley Granger and Cathy O’Donnell are both very good, and it’s no wonder why somebody like Alfred Hitchcock would become interested in having the young man in some of his films (Rope and Strangers on a Train). Cathy O’Donnell would become a William Wyler regular, appearing in Best Picture winners Ben-Hur and The Best Years of Our Lives, as well as his film noir Detective Story.  For Nicholas Ray’s first feature film, the direction is quite smooth and restrained.  It definitely doesn’t feel like somebody’s first film, which is a testament to the skills of the man behind the camera, and probably also to the strict studio system of the 1940’s.

There’s a heck of a lot to admire about They Live by Night.  It paved the way for some of my all-time favorite films including Badlands, the Tarantino-penned True Romance, Bonnie and Clyde, and countless other greats.  The movie definitely runs at its own pace, which helps establish the universe and characters, but unfortunately stops the film dead in its tracks during a few scenes. The important thing is that I was entertained throughout, and thoroughly impressed by how modern it all still feels.  It may not be a perfect film in my books, but it’s definitely a fun, thrilling ride.  It would make way for one of the most underrated directors of the 1950’s, and its influence is still felt today.  It might not be my favorite film in the Noirvember series, but I still found a great deal about it to be satisfied with.  They Live by Night is very easily recommended.