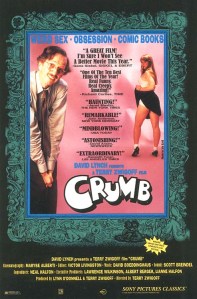 Documentaries certainly don’t get much stranger than Terry Zwigoff’s Crumb, which follows the day-to-day life of American artist Robert Crumb, his wife Aline, and his brothers Charles and Maxon.  This isn’t so much an autobiography of Crumb’s life, but more a fly on the wall perspective of the man and his eccentricities…and boy is he eccentric.  Robert Crumb burst onto the underground art scene in the 1960’s with counter culture and contemporary folk comic books like Fritz the Cat, Mr. Natural, and Keep on Truckin’.  Charles and his brothers were raised in an average American family; their father an author and mother an amphetamine-addicted housewife,  both parents trapped in an unhappy marriage.  It’s hard to believe that the eccentric and bizarre Robert is considered to be the “normal” brother, with both Charles and Max suffering from severe mental illness.

It would have been easy for Zwigoff to paint this family as a group of weirdos, but instead he opts to simply observe.  What follows is an incredible portrait of the creative spirit in all its uniqueness.  We get to find out first hand the shortcomings of contemporary American life that drive Robert’s satirical and at times disturbing works, with the artist telling us firsthand what his works mean and why they’ve been created.  This is what makes Zwigoff’s Crumb stand out from the thousands of other artist portrait documentaries made; he lets the artist speak for himself instead of the director taking the reigns and crafting the narrative.  He doesn’t paint Crumb as a tortured, sympathetic artist, nor a twisted, oddball.  He just lets his subjects be themselves and doesn’t sway the narrative.  Director David Lynch had a hand in producing the film, and I couldn’t possibly imagine a more perfect fit for his surreal, bizarre style.

There are many highlights to be found in Crumb, and oddly enough almost none of them have anything to do with the man’s artwork.  Instead they’re found when examining the artist himself and his peculiar family.  Robert’s odd relationship with his wife Aline is something I enjoyed watching, and would have loved to see more of.  There’s both a coldness and a warmth towards each other that is very difficult to describe.  Robert constantly references his past loves and sexual conquests, and none of it seems to bother Aline in the least.  We even get moments with Robert’s ex, who almost compulsively lied to and cheated on her. There’s an incredible and very rare openness in Robert and Aline’s marriage that I just found to be fascinating.  Other highlights of Crumb are found towards the end of the movie, where Charles and Max discuss their various mental illnesses and how it influenced them sexually.  Charles described himself as having pedophaelic homosexual tendencies, and Max recounts a story of “molesting” a woman in a store, publicly masturbating and pulling down her shorts.  This entire portion of the film is tragic, surreal, and at times even pretty darkly funny.  I’ve never seen anything quite this honest and self-aware, and I adored Terry Zwigoff’s transparency. 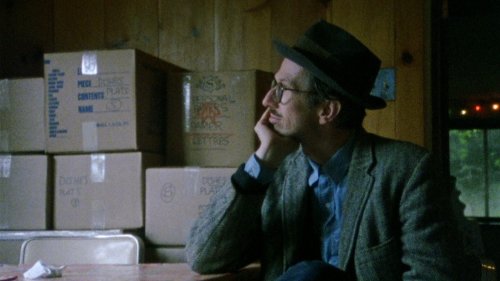 Crumb is a film that I’ve wanted to catch up with for more than five years now, and I’m so glad that I finally have.  Terry Zwigoff’s fly on the wall portrait of Robert Crumb and his family is unlike any documentary I’ve ever seen (with the exception of something like Grey Gardens), and probably would not be made in our current “politically correct” atmosphere.  It’s something I never knew I wanted, and it pains me that it stands on its own stylistically and thematically.  Crumb is an absolute treat from start to finish, but it’s probably not for the faint of heart, nor is it for anybody who is very easily offended.  Crumb is very highly recommended.