D.A. Pennebaker has made such an impact on documentary filmmaking over his fifty-plus year career, and yet I had never seen a single one of his films until just last week.  It is for this reason that I am writing another feature on the man and his terrific films, as I feel few far too few people my age have seen or even heard of his films.  I look forward to seeking out some of his lesser-known films in the future, and even more so being able to see new works from him, starting with his upcoming film Unlocking the Cage, coming out in 2016.  This feature will cover the film that Pennebaker and partner Chris Hegedus considered their “favorite”, 101 (1989), the Academy Award-nominated The War Room (1993), and finally the film that started it all, Dont Look Back (1967).

Having known next to nothing about 1980’s new wave rock band Depeche Mode prior to seeing this documentary, you can imagine my surprise when I stumbled upon anecdotes saying that the masterful D.A. Pennebaker considered this his “favorite” film to make.  Prior to making 101, D.A. Pennebaker was in exactly the same boat as I was, he and partner Chris Hegedus (and David Dawkins) knew little to nothing about the popular English band, and yet came out on the other end more than pleasantly surprised.  The film documents Depeche Mode’s highly successful and epic-scale world tour, ending with their 101st (hence the name of the film) and final show on the long tour.  Not only do we get to see Depeche Mode perform hits from popular albums Black Celebration and Music for the Masses, but we get follow a group of contest winners on their way to the show.  Only the way, Pennebaker and crew allow us  to see the band’s rabid fan base, the lead-up to their show at the Rose Bowl, and backstage interaction between band members, crew members, and many interactions between the young contest winners.

While I thoroughly enjoyed the film’s laid back nature and the live performances featured throughout 101, I wouldn’t say that it made me a Depeche Mode fan, unfortunately.  I very much enjoyed a handful of songs and respect the fact that they were able to pack more than 60,000 rabid fans into the Rose Bowl, but unfortunately 80’s new wave and synthpop just isn’t my cup of tea.  Performances of “Strangelove”, “Everything Counts”, and the famous “Just Can’t Get Enough” were highlights in the film.  On top of terrific live performances and focus on the massive live gate in attendance at the Rose Bowl, Pennebaker has a knack for documenting what other filmmakers would consider mundane.  We are treated to band managers and crew discussing t-shirt bills, the live attendance numbers, arguing about whether the Rose Bowl is appropriate for a live music show of such large scale, etc., all of which makes the documentary feel that much more important compared to other contemporary music/concert films.  While I’m not the biggest fan of Depeche Mode, I can absolutely appreciate what Pennebaker, Hegedus, and Dawkins were going for with 101, and I can say without a doubt that Depeche Mode fans will get a lot out of this. Recommended. 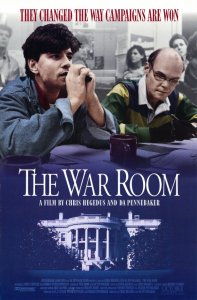 If there’s any one subject that is more fascinating behind-the-scenes than music, politics is absolutely it.  In The War Room, D.A. Pennebaker and Chris Hegedus turn the camera to the New Hampshire Primary in the early 1990’s, specifically the campaign managers James Carville and George Stephanopoulos, who are looking to pull out a big win for hopeful Democratic nominee Bill Clinton.  The War Room allows the audience to take a backstage look at attacks on Bill Clinton’s character, specifically the Gennifer Flowers scandal, as well as the other side of things with the false “No new taxes” promise by then-President George H.W. Bush.  Pennebaker and Hegedus show a world rarely seen by the public, especially in the early 1990’s, a world where few people had access to computers, and even less had access to the internet as we know it today.  We see frustrations, campaigns, event planning and coordination, and most importantly we get to see people acting like people.  The War Room takes a look a few very important figures, and paints them as people, not politicians, not campaign managers, just normal, (mostly) lovable people.

If you know anything about me at all, then it should come as no surprise for you that I absolutely adored The War Room.  This look at the behind-the-scenes marketing and coordination of a major American Primary is right up my alley in every possible sense.  Pennebaker and Hegedus manage to show tremendously important events in the 1992 Clinton Campaign, and yet everything is treated with the same weight and levity, whether it’s Gennifer Flowers claiming to have had a love affair with Senator Clinton, or whether it’s James Carville and George Stephanopoulos developing a rapport and joking with one another, and becoming excited and frustrated with certain revelations throughout the campaign.  The War Room is only ninety six minutes long, but I felt like I could have watched the events unfold for another ninety.  The time breezes by with the help of a razor sharp directorial eye from Pennebaker and Hegedus, lovable subjects in Clinton, Carville, and Stephanopoulos (as well as the entirety of the campaign office), and an inherently interesting and important topic in political campaigning.  Throughout the short run-time of The War Room, D.A. Pennebaker and Chris Hegedus manage to tick every box for me, making their Academy Award-nominated documentary one of their most personal and most important films, and easily my favorite documentary of the bunch. The War Room gets my highest recommendation.

Dont Look Back is quite possibly D.A. Pennebaker’s most critically acclaimed and culturally significant documentary, influencing the next fifty years of music videos, concert films, and documentaries as a whole. Pennebaker’s early film chronicles Bob Dylan’s 1965 London, UK tour, showing live performances, audience interaction, and focuses on Dylan’s inner-circle and on the young prodigy himself.  The film was so critically acclaimed and influential because nothing quite like it had ever been seen before.  Documentary films have been around since the birth of the medium, but nothing quite this raw, focusing solely on a highly acclaimed and incredibly popular cultural icon had ever been produced on this scale.  The film opens up with the music video that would influence generations, Dylan’s “Subterranean Homesick Blues”, which shows the folk singer using a set of cue cards to convey the lyrics of the song to the audience, discarding them rapidly as the song goes on.  On top of the influential and groundbreaking music video, Pennebaker takes a behind the scenes look at Dylan’s tour, showing the folk legend verbally sparring with a TIME Magazine correspondent, interacting with other artists and journalists, signing autographs for young, adoring fans, and interacting with audiences at his lives shows on the tour.

Despite all the acclaimed and influential elements of D.A. Pennebaker’s Dont Look Back, I’m still not sure exactly how I feel about the film.  To be blunt, Bob Dylan came off exactly how you would imagine a young, outspoken, successful artist might come across in their first major appearance on camera – Dylan was incredibly condescending, rude, and ambitious in his words to the point of pretension (a word I really don’t like to use).  Dylan’s condescension in nearly every appearance he made on screen had a tremendously negative effect on my viewing of the film.  As much as I appreciate the man and what he did for music as a whole, Dont Look Back only decreased my liking for Bob Dylan as a person.  I’m willing to accept the fact that it was because Dylan was young, naive, and influenced by the power he held over youth all over the Western world, but I still can’t entirely look past his behavior in the film.  Despite this, the film did absolutely have some incredibly memorable scenes, including a group of young girls excitedly meeting Dylan, with one exclaiming “pinch me – me dreams have come true!”.  The meetings between Dylan’s manager and journalists were also very interesting to watch unfold, as it’s an element most music documentaries seem to gloss over.  Dylan’s musical performances are highlights as well, as are his quips during the performances.  As much as I disliked him throughout the documentary, there’s no denying just how charismatic and charming the young Bob Dylan was.  When the credits rolled, I was left appreciating D.A. Pennebaker’s influential documentary, but left cold as far as the subject matter goes.  For fans of Bob Dylan, music journalism, and those who hold documentaries in high-esteem, I would implore you seek this film out. Otherwise, you may leave feeling the same way I did.  Dont Look Back is cautiously recommended.