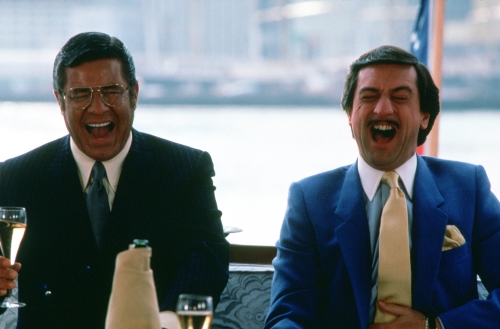 Martin Scorsese’s classic tale of a deluded wannabe comedian made an immediate impression with me, exceeding any expectation I held.  The King of Comedy tells the disturbing story of Rupert Pupkin (Robert De Niro), a man obsessed with successful comedian and television host Jerry Langford (Jerry Lewis).  He fantasizes day and night about Langford launching him to stardom, even though Pupkin has no real comedic leg to stand on.  After facing constant rejection, Rupert decides to kidnap Langford in exchange for ten minutes on his program.  While Scorsese’s film has very funny moments throughout, The King of Comedy is a surprisingly dark affair.  It’s a deeply cynical satirical look at celebrity worship, taking it to numerous extremes.  The script by film critic Paul D. Zimmerman is tremendous, combining a sharp wit with a dark, cynical worldview, and terrific moments of character development.  His Rupert Pupkin is easily one of the most compelling characters ever played by Robert De Niro, who brings a deranged, clueless twist to the role.  His performance holds up the entire film, making the audience fear him and sympathize with him simultaneously.  Jerry Lewis’ performance as Jerry Langford is quite good too, and the fact that his character is hardly phased by anything really adds to the film’s comedic flavor.  My favorite moments in the film are the many times Rupert Pupkin’s name is mispronounced, and the nonchalant way De Niro’s character plays it off.  While The King of Comedy may never reach the dramatic highs of Scorsese’s Raging Bull or Taxi Driver, it serves as a compelling and at times disturbing character study, and its themes of celebrity worship and the desire to become famous really resonate.