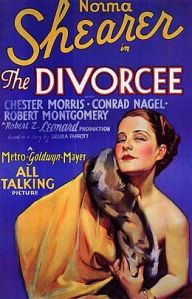 Robert Z. Leonard’s film The Divorcee begins on a far more exciting note than 1929’s In Old Arizona (the first film in our marathon), setting a brisk pace and a progressive attitude that never lets up over its 80 minute run-time. The Best Picture nominee was developed primarily as a vehicle for Hollywood superstar Norma Shearer, who picked up an Oscar for Best Actress for playing Jerry, the film’s titular divorcee. The Divorcee opens with a party where love and passion is in the air and jealousies are running high, when suddenly that all comes to a halt with the jarring sounds of a car accident. From there, The Divorcee establishes its consistent tone and rather progressive attitude, imagining women as social and sexual equals to their male counterparts.

The Divorcee follows Jerry (Norma Shearer) and Ted (Chester Morris), a couple who have been married for three years. When Jerry discovers that Ted has been cheating on her, she decides to get even with her husband and sleeps with Ted’s good friend Don (Robert Montgomery). When Ted returns from a business trip, Jerry informs him that she’s “settled their accounts”, and an enraged Ted demands a divorce. From there, The Divorcee turns into a picture chock full of adultery and open sexuality, apparent alcoholism, and melodrama of the highest sort.

Melodrama has always been a major point of interest for me – there’s just something so inherently fascinating about watching the heightened romantic lives of exaggerated on-screen characters. The Divorcee is no different than many of the melodramas I’ve enjoyed in the past – its passions are exaggerated, the situations unlikely, and the consequences non-existent, which is probably what ultimately contributed to my overall enjoyment of it. Norma Shearer’s Oscar-winning turn as Jerry is terrific, showing off strength, wit, and independence in every scene of the film – even if some of her actions were questionable. The character of Jerry seems incredibly forward-thinking for 1930, long before the era of screwball comedies where women were believably verbally sparring with men. Her character feels like a living, breathing human being who has believable faults and lovable charms about her, something that the previous film in our marathon was sorely missing. The Divorcee intelligently tackles themes of adultery and human sexuality with a deft – if sometimes clumsy – hand, showing off a great deal of pre-code Hollywood goodness. On top of themes of sexuality and the sanctity of marriage is the rampant use of alcohol – which seems to appear in every major scene in the film. The film’s early accident scene is probably one of the first instances of drunk-driving on the big screen, another instance of progression in this exciting pre-code era. The script by Nick Ginde, Zelda Sears and John Meehan (based loosely on Ursula Parrott’s story Ex-Wife) asks the audience bold questions about infidelity, and paints a brief picture of a strong, modern woman getting even with the man who betrayed her. One of my major problems with The Divorcee is a side story involving Paul (Conrad Nagel) and Dorothy (Florence Eldridge), which only served to add to the film’s melodramatic nature and add some minutes to its runtime. While the side story in general is interesting, it just doesn’t feel natural to include it in what is already a fairly compelling and dramatic story of love gone bad. The film’s ending is another weak point, as it goes against the overall tone and message that I felt the writers and director were trying to portray. The whole experience just feels rather counterproductive in its last ten minutes, which is a damn shame.

The Divorcee is a strong, dramatic film from director Robert Z. Leonard. Its themes of sexuality, infidelity, and divorce were groundbreaking at the time, and hold up rather well all things considered. It’s a film that simply could not have been made in a post-Hays Code era, at least not on this scale. Norma Shearer’s Oscar-winning turn as Jerry is very strong, realistically portraying a strong, independent, free-thinking female protagonist. Overall, Leonard’s film is a mostly strong take on an all-too taboo subject – divorce. It falls apart slightly in its final minutes, and features some unnecessary plot elements, but the positives outweigh the negatives here. The Divorcee is worth seeing for its forward-thinking screenplay, its charming melodramatic nature, and for Shearer’s performance alone. It’s recommended.

The year is 1945, the second Great War has just rocked the entire world to its foundation, and the slow process of rebuilding and punishing those responsible is underway.  Commander John Ford had just returned from his tour of duty in the war, serving as the head of the photography unit for the Office of Strategic Services.  His time abroad saw him make several propaganda films for the United States Navy, including The Battle of Midway and December 7th.   Not only did the his time in the war see him make several successful films for the Allies (even winning an Oscar for Best Documentary Short for December 7th), but it even included Ford being at the famed Omaha Beach on D-Day.  When he finally returned home, he began to do exactly what he did best – direct the hell out of some great American films.  His next project after the war was 1945’s They Were Expendable, once again featuring a WWII backdrop, but this time focusing entirely on the American effort in the Pacific.  Once again featuring a group of rough men aboard a ship, They Were Expendable is a very fitting sequel to my review of 1940’s The Long Voyage Home. The film starred fellow war veterans Robert Montgomery (as Lieutenant John Brickley), and Jack Holt (as General Martin) as well as John Wayne (as Lieutenant Rusty Ryan), who was too old for the draft, and Ward Bond (as “Boats” Mulcahey), who was rejected by the draft due to his epilepsy.  John Wayne would try his best to enter into the war, but would ultimately fail in going overseas to serve his country.  Those close to Wayne said that not serving in the war was one of the biggest regrets of the star’s life, and that it caused him to overcompensate with over-the-top patriotism for the rest of his life.

John Wayne, Donna Reed, and Robert Montgomery in 1945’s They Were Expendable.

They Were Expendable follows a squadron of patrol torpedo boats, led by Lieutenant John Brickley (Robert Montgomery), as they travel to the Philippines to help ward off the threat of Japanese invasion.  The crew consists of the aforementioned Lieutenant Brickley, Lieutenant “Rusty” Ryan (John Wayne), “Boats” Mulcahey (Ward Bond), and Ensign “Andy” Andrews (Paul Langton), and Ensign “Snake” Gardner (Marshall Thompson) among others. The crew learns of the attack on Pearl Harbour, and are immediately assigned to the unglamorous task of being a “messenger” boat for other, larger, warships and squadrons.  The team is quickly forced into active combat duty after a surprise attack by Japanese warplanes, but are once again relegated to the lesser task of running messages.  After Rusty becomes injured during the surprise attack by the Japanese forces, the group meets 2nd Lieutenant Sandy Davyss, an army nurse who helps the men by giving them food, shelter, and aid.  As the men consider what to do next, Rusty and Davyss quickly begin to develop a romantic connection.  Frustrated with their roles in the war, the men come to realize that the small ships in their command may serve a far greater purpose than just messaging.  The men decide to use the small ships to their advantage in the success sinking of larger Japanese ships.  After some great victories and some tremendous losses, the crew are ordered to aid in the evacuation of General Douglas MacArthur and his family.  With Japanese moving closer and the nearly inevitable fall of the Philippines to Japan, can the crew of experienced soldiers survive the onslaught, or will their efforts and sacrifices be fruitless?  Find out in John Ford 1945’s They Were Expendable.

I won’t lie to you, my initial review for Ford’s last wartime film was initially going to be a negative one.  After questioning my own judgment and thinking it over, I decided to re-watch the film and see how I felt the second time around.  The good news is that They Were Expendable is much better than I gave it credit for, and this review is not nearly as negative as I had intended.  The film starts on a good note, and feels very much like The Long Voyage Home in the way it introduces the players to the audience.  Robert Montgomery’s Lieutenant Brickley is immediately likable in his clear strength in leadership, as is John Wayne in another performance that asks a little more than usual from Wayne.  The rest of the crew fits quite nicely, even if they don’t share the same amount of screen time or importance as Wayne and Montgomery. The chemistry between everybody is quite smooth, and that’s the important thing in a squad-based film like this.  The effects in They Were Expendable are terrific for their time, picking up an Academy Award in the process.  The attacks by Japanese warplanes feel deadly, surprising, and set the stakes in exactly the way they should.  When members of the crew and other Allied soldiers are shown dying, you genuinely feel it deep down.  Even though the Philippines is almost inevitably going to fall from the very beginning of the movie, you still hold out so much hope that somehow, someway these men and women will be able to fend off invasion.  The standout scene for me included Montgomery’s Brickley and Paul Langton’s Ensign Andrews in a hospital, as it is both incredibly powerful and emotionally devastating.  It comes in the middle of scenes showing both fighting and celebration, and packs a punch when it comes.

Overall, there’s a lot to like about Ford’s They Were Expendable.  It’s a admittedly a little slower than a war film of this nature should be, but I understand that the film is more about its characters and building tension.  The cast all put in good performances, with Robert Montgomery being the standout of the bunch.  Though the film may not be Ford’s greatest, it is still very admirable that the man would would want to revisit the subject of war even after being on one of the bloodiest battles in history.  They Were Expendable is recommended.